The Inner Circle is back, guys! Any book by Sarah J Maas is pretty much an instant buy for me and this one was no exception. I was eagerly anticipating reading this novella and I was not disappointed. Overall, the book, while not the best of the series, did what it was intended to do, and bridged the gap between the original Court series and the new spinoff trilogy that is in the works. I enjoyed it!

As with any new Maas book, there has already been a whirlwind of conversation surrounding the release of A Court of Frost and Starlight. Much of what I have seen is positive, but of course there are those people that seem to read her books only to trash them on the internet later 🙄. That being said, I am going to focus on my opinion and offer a brief explanation of what I loved about it and a few things I did not like about it. All in all, I thought this was a great addition to the series and accomplished exactly what it set out to do. This has always been marketed as a novella, not a full length novel, so I was not shocked or upset at the roughly 250 page story we got. And, I was not expecting this book to be brimming with plot and extensive action scenes….It’s a novella. It was clearly stated that this was a short piece to tie up the original trilogy and introduce the following spinoff. Why would she go into the specific scenes and plot points that she has planned for the next series in the brief novella?? That makes no sense. Take it for what it is people! I thought it was a great transitional story and effectively brought Feyre and Rhys’ arcs to a close (not completely, but it smoothly indicated that the narrative is moving beyond them), while introducing the new stories/POVs we know Maas has planned.

After reading it, we all know that the next series is going to focus on Nessian (yay!), but what are your thoughts on the others? I am thinking there is going to be a Mor-centric series about her travels around the world (and hopefully finding a nice lady love, too). It also set up a very obvious Lucien, Vassa, and Jurian story. The Band of Exiles would make a great subject I think! I also get the feeling that she set Tamlin up for a new series/path, which I am pretty indifferent to at the moment. We will see. I will read it regardless, but he just does not interest me all that much. What do you guys think about the following spinoffs?

Now, here is a little insight into my feelings while reading A Court of Frost and Starlight:

Let me preface by saying that although I am critiquing parts of this novella, I want readers to be aware that Sarah J Maas was going through an exceptionally hard time while writing this book. She details everything in her monthly newsletter . With all that was going on, it is a wonder she was even able to produce the book. I would hope that my readers would understand a situation like that and perhaps not judge me quite so harshly for the work I produced during that time.

Well! That may have been a little longer than I intended, but that tends to happen when I am talking about Maas’ books. What did you guys think? 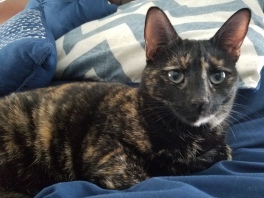 While it wasn’t quite purrfect, it was entertaining and set up the next books perfectly.

Thanks and happy reading!

Title: A Court of Frost and Starlight