“”Life won’t just happen to you, boy,” [Master Hyrrokkin] said. “You have to happen to it. Remember: The spirit grows sluggish when you neglect the passions.”

“My spirit is fine.”

“Then you’re going sadly wrong. You’re young. Your spirit shouldn’t be ‘fine.’ It should be effervescent.””

This book was extremely frustrating to review. Some parts were so good, but other parts were not good at all, not even in realm of good. And sadly, those parts clashed with what I loved about it. Ultimately, it balances out around 3 stars, with most of those points going to writing quality alone. That score is way lower than I was expecting to give, when I first started reading. I thought for sure this was going to be a 4.5/5 star read and I am disappointed in how it turned out. But, I could not overlook its flaws. Hopefully, I can articulate exactly how I feel about Strange the Dreamer for you guys.

Before I began reading, I didn’t know too much about this book. I knew that I had read the Laini Taylor’s previous series and it was good. Not great, but good. The synopsis was very vague, simply hinting at a lost city, a war between gods and men, and a librarian going on an adventure. Well with that, I was like: Sign me the eff up! That brief summary sounded awesome and I immediately knew I wanted to get my hands on this book. After that, I saw great reviews from other readers and I figured it had to be a fantastic book. And it was! At first. The first half of the book is way better than the second half, which is super unusual and not very promising, honestly.

Strange the Dreamer starts out with orphaned Lazlo Strange growing up in a monastery, and then a library. He is quiet and insignificant and told that he will not do great things, but help other men do great things. He is humble, unassuming, and dreamy. He lives through fairy tales and stories and reading books, and he is obsessed with the lost city of Weep. Right off the bat, I loved Lazlo’s character. He is genuine and kind, and he felt authentic. His musings over Weep and his flashbacks about his childhood were very interesting. I wanted to know more about him and the stories he had read.

But then, within about sixty pages, the citizens of Weep just showed up at the library to gather some delegates and take them back to Weep. They needed them to help solve a problem. Hmm, ok. There was really no reaction to these people from a lost-for-centuries city just waltzing into Lazlo’s kingdom. It felt quite abrupt and there was no build-up. This is the point where I started to feel disenchanted with the story, which shouldn’t happen here, as this is supposed to be the most exciting part (They are going to Weep, hurray!). But, it wasn’t. Something felt like it was missing.

It did not help that at this point, we are introduced to another perspective, as well. Sarai. Jeez. She is the offspring of one of the fearsome gods that ruled over Weep, using cruelty and fear, and one of the citizens who was “taken” for the god’s purposes. Sarai and the other godspawn (as they are referred to) are living in secret in the seraph citadel suspended above Weep. However, Sarai uses phantom moths to split her consciousness into hundreds of little spies, so that she can see how the humans live and give them nightmares about the gods. Alright, that is a lot to process.

So, the godspawn are the unwanted offspring between the gods and the people of Weep. And they each have powers…But, that’s about it. After the initial introduction/mystery of their existence, they were so boring! It just seemed like they were some half-cocked idea there as window dressing. The pages featuring Feral, Ruby, Minya, and Sparrow were literally wasted. They were pointless. And Sarai was a blank, annoying character with way too much page time. She sneaks into the human’s dreams and wishes she was not godspawn, and that is her entire character (until Lazlo shows up). Her thoughts go round and round, thinking the same things for hundreds of pages. It became quite redundant.

And then, as I was beginning to lose all hope, with about 300 pages to go still (did I mention the book is unnecessarily long?), Lazlo and company arrive in Weep. I thought maybe the book would pick back up, now that Lazlo was in the literal land of his dreams. But it got worse! It seemed like the moment Lazlo arrived in Weep, the story lost any semblance of adventure, mystery, action, or logical plot structure. At this point, Strange the Dreamer became nothing more than a romance. Which would be fine, if that is what the story was intended to be. But it wasn’t. It makes no sense for Lazlo to suddenly fall in love with a half-goddess, in a dream no less, and care about nothing but her from then on. Lazlo himself lost all substance and became a blushing caricature of his earlier self. He and Sarai were so flat, when they were together. There was zero chemistry between them to warrant their sudden devotion to each other, and honestly, I was turned off by their romance altogether.

Let me try to explain: Lazlo is a twenty year old, shy, nerdy dude who has not even looked upon a girl’s collarbones, let alone been romantic or intimate with one. Sarai is a sixteen year old spawn of the gods who has literally been trapped in a citadel her entire life, with only the company of her godspawn siblings. The only romance she has ever encountered has been from spying on couples in Weep. Therefore, she has absolutely no experience with intimacy, physical or otherwise. Which made her abrupt love of Lazlo feel cheap and forced. She doesn’t even know what love is! Neither of them do. They are lusting after each other in dreams (which was way too convoluted and confusing and weird, in my opinion) and that makes them what, soulmates? No, I do not buy it. An agoraphobic guy and a sheltered girl who start kissing in dreams is not a beautiful, destined love. It is forced, unfounded, and borderline creepy.

So, because the entire second half of the novel focused on this silly, immature romance instead of actually interesting things (like the Godslayer’s struggles, Weep itself, how the people cope with their trauma, the history of their world, etc.), I lost interest. There were some very serious and intriguing ideas/themes that Taylor introduced here, but they were completely overshadowed by Lazlo and Sarai’s nauseating goo-goo eye dream fest. That is so disheartening. I basically did not care what would happen at the end and when all of the “shocking twists” popped up, I felt nothing. Oh, Lazlo is god-spawn, too? How freakin convenient. Let’s just ignore all of the illogical holes in that plot device, because it means he and Sarai were #fate. Gag. I really hate that trope and this is the second series by this author where she uses it as an excuse for all of the insta-love between her characters. It doesn’t work! The ending was so stupid, too. Like every single other character was ignored so that Lazlo could try to save Sarai and then, when he couldn’t, he basically enslaved them both to the little godspawn tyrant. So, on top of everything else, Lazlo is an idiot now, too? Great. There goes that character I actually liked.

Can you guys tell I am frustrated? I wanted to like this book so much and it had such great potential!! But it was tossed aside for a stupid, stupid, unnecessary romance. The story could have been much better (and shorter and more cohesive), without all that crap. Without it, the characters would have remained interesting, we could have had a real conflict between Weep and the godspawn, we could have learned more about Weep and the gods, and discovered more about the world. We could have had the book I was expecting to read!

The writing was phenomenal, though. That is never the issue with Taylor. She is an exceptional writer and her imagery, prose, and structure are gorgeous. The first half of the book was beautiful and imaginative. It was lush and vibrant. Positively captivating. So, it made me mad, when this amazing writing was diminished by the terrible plot! Everything was forgotten in the second part of the book. The worldbuilding that seemed really strong at first, was never given any follow-up. Yes, Weep has beautiful lapis-lazuli roads, golden domed buildings, magical creatures, and fancy cakes. But where is the depth? Nothing was explained beyond telling us what things looked like. What made Weep what it is? What do the people believe? What is the history of the people and the city? What are these wars being discussed? How did the city survive in isolation for 200 years? How the hell did Lazlo get to the monastery and why wasn’t he blue? There are so many unanswered questions. And I know there is going to be another book in the duology, but I’m not confident the second book will focus on the important, fascinating things. It is going to be all about Lazlo being sad, because Sarai is a ghost now and Minya controls them both. Boo hoo, that was your own stupid decision, anyway.

So, yeah. This book irritated me. I wanted it to be better than it was. I wanted it to maintain that magic of the first sixty pages, not backslide into ridiculous trope territory. And I know it sounds like I didn’t like this book at all, but I really did love parts of it. That writing? Amaze-balls. Strange the Dreamer is worth reading if only to immerse yourself in Taylor’s descriptive prose.

Will I read the second one? I have no clue at this point, but I can definitely say it is not at the top of my list. Have you guys read it? What did you think? Is it what you expected? How ’bout you, Cake? 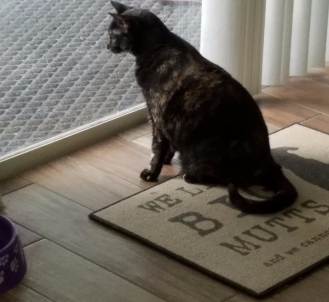 4 thoughts on “Book Review: Strange the Dreamer by Laini Taylor ★★★”