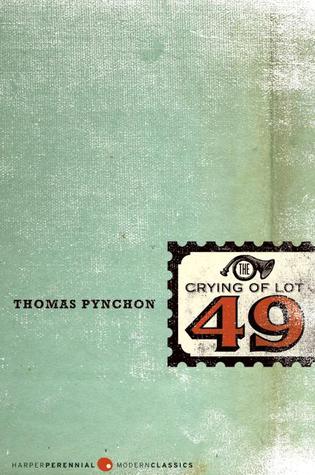 “Perhaps her mind would go on flexing psychic muscles that no longer existed; would be betrayed and mocked by a phantom self as the amputee is by a phantom limb. Someday she might replace whatever of her had gone away by some prosthetic device, a dress of a certain color, a phrase in a letter, another lover.”

I finally got around to reading this book and I am so glad I did! Don’t you just love the feeling of finally being able to move a book from your TBR pile to your read shelf? Mmm it’s a good one. That being said, this was a bit of a difficult book to review. While only being about 150 pages, this little novel was chock full of dense language, insane conspiracies, crazy characters, and nonsensical dialogue. So, basically, it had all of the characteristics that I love about a satirical, postmodern, meta social commentary, parody fest. Woo!

I really liked this book! It took me about a chapter or two before I was in the proper mindset to read it, though. It’s a wild one for sure!

The story is focused around Oedipa Maas, a woman in her late twenties who is charged with settling an old lover’s estate after he dies. During her time on the case, she meets a wide array of colorful characters, gets sucked into a conspiracy theory mystery, and goes a little bit insane. You just have to roll with it, I promise!

This is the first book I have read by Thomas Pynchon, so I did not know quite what to expect with his storytelling or writing style. I must admit that I do not feel like it would be everyone’s cup of tea-spiked-with-whiskey. He has a very stream of conscience type style that he employs as Oedipa’s narration. At times it reminded me very much of Jack Kerouac in that it just kept going on and never paused to take a breath or reflect on the previous events (in a good way). Scene after scene was rolled out for the reader, and yes, they were connected to a larger-scale story, but they were also, for the most part, self-contained. We were in Oedipa’s thoughts the whole time and yet we never really dove into them, if that makes sense. Her narration was an ongoing fever dream that got more obscure the farther into the book you read.

Still, despite these seemingly disjointed events, the book flowed with a sort of frantic energy. The reader, as much as Oedipa, is desperate to find out what the muted horn symbol is and where it came from. How does it tie into her life and the estate that she is in charge of cataloging now? Her journey toward enlightenment is punctuated with random and strange people, who act as parodies of some well known tropes. There is her schmuck husband who is afraid of being a car salesman and knows nothing about her. The “hilarious” psychiatrist that turns out to be a Nazi war doctor in hiding. The philanthropic ex boyfriend who seems to have owned nearly the whole state of California. The womanizing partner that ends up being a Humbert Humbert, leaving her for a teenager once Oedipa gets too old and crazy to hold his attention. The old professor that holds discussion circles in his backyard and is a little bit too close to some of his students. The British-music-influenced band who leave alcohol outside of her hotel room like an offering to the fairy folk. All of these characters are presented with little to no background stories or explanations, but they populate Oedipa’s world nonetheless, aiding and hindering her on her path to discovery.

The simultaneous introduction and then neglect of these characters, coupled with the satirical nature of the story, reminded me a lot of Kurt Vonnegut, especially Slaughterhouse Five. They are written in the same vein of storytelling.  The very style of the book is one of parody. Nearly every sentence is poking fun at something, commenting on society during the time, tongue in cheek, etc. The word play and language Pynchon uses is masterful throughout the novel. There is an entire sequence that gets Oedipa searching for an answer to her Trystero enigma, where Pynchon has written a play within the story. He wrote a pages-long Greek tragedy that both honors and ridicules such works. It is hilarious and brilliant.

One of the main themes of the novel, that of the difficult and transient nature of communication, whether it be with your spouse, your therapist, your fellow human, yourself, etc.,  is left wide open with no resolution. Oedipa’s quest for answers is largely left unresolved in the end where the story stops rather abruptly. Her existence is left vulnerable to illusions, half-truths, drugs, hysteria, and paranoia. While this is reflective of the times the book was written and is in tune with the novel’s overall message, it can be jarring for some readers. So, I can see how some people might find this frustrating. However, for me, when I read books such as this, I simply tag along for the wild ride that they are sure to be. Books about human nature or life or society are far different to me than a book with a solid plot. You cannot always predict human nature and that is what makes so much literature like this interesting to me. There is not always a happy ending or a summary tied in a perfect little knot at the close.

The fantastic writing, the intellectual and absurd ideas presented, the puns and jokes, the odd action and eccentric people, the sheer nonsense and creativity – those are the things that make this book, and others like it, worth reading. I thought this was an excellent story, a lovely satire that I will definitely recommend to those who I think can really appreciate it!

Ah yes, good. A book where I can sit back and make this face after reading it. I am such intellect. Much philosophy.