Hey, ya’ll! I have been wanting to incorporate some additional types of posts here and I was thinking that a throwback post would be fun. I am not 100% certain what the structure will be, but I think anything that strikes me as a throwback piece will do. You know something old-school or riddled with nostalgia. Or just something I wrote a while ago, that I would like to share! Creative or otherwise. Maybe I will write up some stricter rules for it at some point, but for now, I just want to have fun with it.

So, to kick it off, here is an essay I wrote a few years back about Season of Migration to the North, by Tayeb Salih.

After years of study in Europe, the young narrator of Season of Migration to the North returns to his village along the Nile in the Sudan. It is the 1960s, and he is 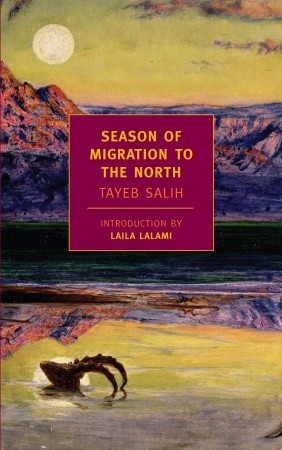 eager to make a contribution to the new postcolonial life of his country. Back home, he discovers a stranger among the familiar faces of childhood—the enigmatic Mustafa Sa’eed. Mustafa takes the young man into his confidence, telling him the story of his own years in London, of his brilliant career as an economist, and of the series of fraught and deadly relationships with European women that led to a terrible public reckoning and his return to his native land.

But what is the meaning of Mustafa’s shocking confession? Mustafa disappears without explanation, leaving the young man—whom he has asked to look after his wife—in an unsettled and violent no-man’s-land between Europe and Africa, tradition and innovation, holiness and defilement, and man and woman, from which no one will escape unaltered or unharmed.

Season of Migration to the North is a rich and sensual work of deep honesty and incandescent lyricism. In 2001 it was selected by a panel of Arab writers and critics as the most important Arab novel of the twentieth century.

Understanding the Individual in Season Migration to the North

The role of the individual as it pertains to ones place in the community is a much debated and not completely lucid subject. By studying the primary characters in the Tayeb Salih’s Season Migration to the North, one can further analyze the concept of individuality and how the interactions with one’s community and society shape a person. One can also research the idea of sacrificing personal identity to accomplish a larger and more encompassing purpose. In the book, the concept of identity and personal way of life is studied and challenged to great lengths. The chief character Mustafa represents a certain kind of lost soul that uses his appearance and other people’s stereotypes to further his own personal mission. To what extent however, is this ruining and prolonging the stereotype of the very foundation that his identity is built upon? By comparing the narrator’s similar story to that of Mustafa’s, one can examine the role of the individual in the face of the community. The following success or failure of the character can then be analyzed. And in the end, it can be seen that the community, according to Salih is a necessary and essential part of living a full and productive life.

As a concept on its own, it is believed that a person’s individual identity is molded by the community that they are raised in and there is inevitable influence by those around them (Milton). Naturally this leads to a certain loyalty to and recognition of the customs and ways of life in the primary community of one’s childhood. However, this idea can be affected by certain things such as outside influence and physical location, both of which are evidenced in Salih’s novel. The very nature of Sudan in the book is interrupted and challenged by the lingering effects that British colonialism and imperialism had on the community residing there, which can “lead to a discordance among the people” (Davidson). It became a sort of divided nation with a definite chasm between the North and the South. The Sudanese people felt separated from their own customs and cultural traditions, thus creating a chaotic merging of these “cultures in contact” that must take time to level out into something altered and new so they do not become “cultures in conflict” (Geesey). This already leads one to question the basic foundation of one’s identity, especially as it pertains to the narrator and Mustafa Sa’eed in the novel (Milton).

These two primary characters are unique in the village because they leave the security and familiarity of their home in Sudan and the surrounding cities to seek higher education in London. From the very start this leads to a separation of sorts from the rest of the villagers, a kind of severing of the ties with their homeland and the customs found there. While their intentions for leaving Africa are slightly different, the resulting sense of not belonging in either country is the same for both characters, and each go about trying to reclaim their identities in different ways (Salih). This study of their similar yet different journeys is the basis in analyzing the effect the community has upon the individual.

The case of Mustafa Sa’eed is perhaps the more fanciful and embellished journey through Europe and life. He goes to London a stoic man and makes it his mission to seek revenge on the North for the corruption and invasion of Africa. Sa’eed perfects the art of manipulation and uses his looks, his intelligence and his culture, paired with other people’s stereotypes, to seduce the young women of London. He allows them to think what they will of him, to belittle and underestimate him, because in the end he is the one taking the fair-skinned ladies back to his richly decorated room. And here, they are sufficiently poisoned by the images and scents they are surrounded by, they succumb to his African influence and are, essentially, tarnished – tarnished like his home was.

This quest of vengeance, however, does not come at a cost of nothing and it is interesting to observe the resulting effects to Sa’eed as an individual. By undertaking such a scheme as to force people to perceive him in so many different ways, Sa’eed has lost his own sense of individual identity that was so fragile to begin with. By being part of two different worlds, he does not truly fit in either. When he is stationed in London, his chambers are furnished in African décor; when he has a home in Sudan, he has a secret room filled with his past life in Europe and everything that he affected and that in turn affected him during his time there. According to Mike Valez, this is a kind of exile from both different worlds, thus belonging to none. This simultaneous sacrifice and rejection of his own society and community is further exemplified by the devastating relationship that Sa’eed has with his English lover, Jean Morris (Siddiq). The encounters between Sa’eed, who represents the rough Southern man, and Morris the sophisticated woman of the North, are read as a constant power struggle, a violent grappling for domination. There is the underlying sense of love, however twisted it may be, and in the end, Sa’eed succeeds in the ultimate control. He ends up killing Morris, but the death is portrayed as a love scene and the act of stabbing a passionate caress “past, present and future, [were] gathered together into a single point before and after which nothing existed” (Salih). What this seems to be implying is that by conquering and corrupting as he wished, Sa’eed is not really succeeding at all. His mission ends in blood and depression and he eventually disappears in the Nile, the life source of his people, after living again in Sudan for some time. The revenge that Sa’eed wished to enact upon the people of Europe really did nothing more than isolate him from not only his society, but his own identity, and essentially led to his ultimate damaging obsession with the idea.

Following a similar path, the narrator of the novel grows up in Sudan only to travel to London to further his studies at a higher level. He notes that he never feels a great sense of belonging in the North and that focusing on his teachings is his main priority. Returning home to Sudan, however, does not ease this reaction either and the narrator is regarded with a distinct form of hostility and derision from the native villagers that he used to be close to. He finds himself caught between two different worlds, just as Sa’eed was, and must face rebuff from both fronts. It is at this point that the narrator, now working in administration in Kartoum, learns the story of Mustafa Sa’eed and takes the time to reacquaint himself with the ways of life in his Sudanese village. By familiarizing himself with and becoming a part of Sa’eed’s story, the narrator is giving himself the opportunity to see a potential course of events in his own life. The question arises: what is the proper method of using his education (Milton)? Should his intelligence be sequestered and horded such as Sa’eed’s, or should he, as the village mayor Mahjoub has suggested, forget the books and the poems and find an identity again by helping his community in present and purposeful ways? Mahjoub made it clear that his amount of education would “do [him]” because ultimately they are “farming folk” without true need for fancy and sophisticated education. And even earlier, it is said “We have no need of poetry here. It would have been better if you’d studied agriculture, engineering or medicine” (Salih). Obviously, the village is not impressed by the European standards of such a scholar because, really in the end, what can be done with such knowledge that can in any way improve the ways of life of the people he left to get it.

Ultimately, when it comes down to the drastic choice in the very waters of the Nile, the narrator allows himself to embrace his community once again and succeeds at that which Sa’eed failed. The Nile itself is a symbol for the character’s home. It is the very bloodline that allows the surrounding villages to drink, wash and cultivate crops. By having the narrator’s epiphany in the river, Salih is further demonstrating the need for one’s community. He retains a sense of self through his people’s homeland and remains steadfast in his own identity.

The role of the individual can then be debated as pertaining to a community or large group. As Benedict Anderson contemplates in his novel, there can be various definitions of what does or does not apply to a communal versus an individual role in life and many factors must be taken into account. In regards to Season of Migration to the North specifically, there is a definite message that the individual cannot separate from society and from their community with much hope of success. Mustafa Sa’eed cannot take on the entire North in vengeance while rejecting and simultaneously being rejected by his very people, despite how they may have been influenced previously. It is clear that one has a much better chance at life and fulfillment by embracing their identity and using it to further the prosperity of their community.

Title: Season of Migration to the North