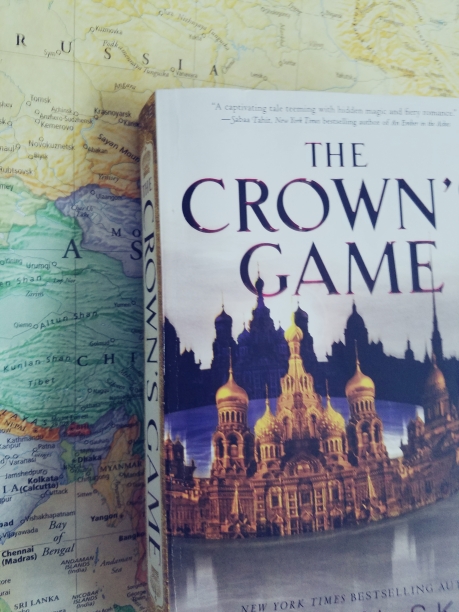 “”There’s actually an old Kazakh proverb that says, ‘There are three things a real man should have: a fast horse, a hound, and a golden eagle.'”

Vika wrinkled her nose. “And what about a real woman?”

Nikolai laughed. “A real woman should have those things, too.””

Hello, friends! It looks like I am going steady with the 3-star books right now! Ever since I saw this one on Goodreads, I was really excited to read it. Set in Russia with magic, hellooooo?? And, after finishing it, I am happy to say that I enjoyed it! The Crown’s Game is a fun, light, and very charming novel. So, read more about it below!

What first drew me to the book was the cover. It is so pretty! And I knew just by looking at it that it was going to be somehow Russia-related. No matter what, I am always drawn to a book set in Russia, so I was very happy to learn that’s where this book takes place. I think the author, Evelyn Skye, did a nice job researching the place and time period here. She clearly respects the country and the culture, and tried to highlight some of the things that make Russia so beautiful and intriguing, including fashion, architecture, food, camaraderie, prowess, the countryside, the Tsar, and the sense of mysticism that seems to linger around it. The best example of this is where Skye had one of her characters create magical benches, that show whoever sits on them the most beautiful Russian settings and brightest gems of the nation.  This is not a history lesson by any means and I do not think Skye ever intended for it to be read as such. It is a fun story about a young man and woman who discover they have magic, and who must fight over who gets to use it for Russia. And who gets to die. So, don’t take it too seriously! 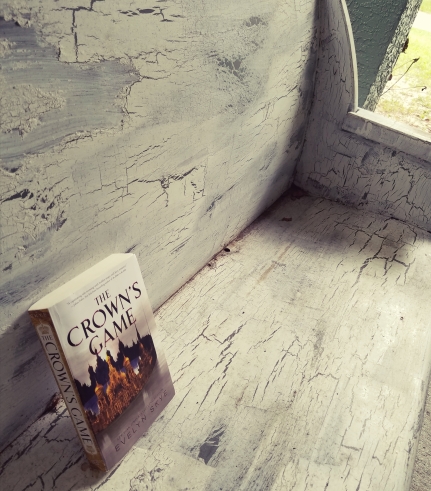 Speaking of those two: they were decent characters, but I think they could have been fleshed out a little bit more. All of the main characters were rather flat. Nikolai was my favorite character and he felt like the only real/flawed one in the bunch. He was interesting and his narrative was the one that flowed the best. I liked his struggle to find his own path, despite his people’s rejection in the Steppes and his benefactor’s cruelty. Pasha, the Tsesarevich, was a fun character at first, but he became pretty one dimensional throughout the book. His feelings for Vika and his anger at Nikolai later felt way over-exaggerated, so much so that he became a bit tedious to read. And, coming to Vika, she was an okay character. Her “specialness” and “goodness” got pretty tiresome after a while, though. She was just so perfect that it felt forced a lot of the time. It felt like we, as a reader, did not even get to know her real personality.

And of course, both of the other, male main characters were desperately in love with Vika by page 100 or so. There was also some side character that had no impact on the story whatsoever, who was just thrown in there to be in love with Nikolai. So really, this was a whole love square thing happening. Yeah, I could have done without that. And the fact that it was all most definitely insta-love. *rolls eyes hard enough to cause a tsunami* It wasn’t the most infuriating love conundrum that I have come across, but it was completely unnecessary. And boring! You could tell that one character had an edge over the other in terms of “who Vika liked” and it caused a huge rift full of drama between everyone. It was annoying and lame, but it did not completely ruin the book for me, which would normally have been the case.

I think the reason that I could look past the negative aspects of the book and simply enjoy the good ones, is because it felt very light. The Crown’s Game had no real conflict or sense of danger. Even during the climax where there was magic and knives flying, I did not truly fear for the characters, or the outcome. And the whole subplot involving Nikolai’s zombie mom was just a odd and did not fit with the rest of it. The book was pretty predictable and majorly fluffy, but it had decent writing and a charming story. It was clear that it was intended for a younger, less critical audience and that was okay with me. Overall, I liked the story, because I enjoyed it for what it was and I did not take it too seriously. It was fun, but it won’t really stick with me for years to come. That being said, I do intend to get and read the sequel, The Crown’s Fate! 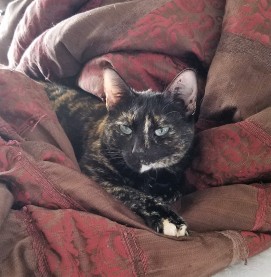 This book was a fun escape from the crushing reality of life.

Hmm ok, thanks for that Cake! And thank you all for reading!