“Some revolutions change the world in a day. Others take decades or centuries or more, and others still never come to fruition. Mine began with a moment and a choice. Mine began with the blooming of a flower in a secret city on the border between worlds.
You’ll have to wait and see how it ends.
Welcome back to Scion.”

After a brief hiatus, I finally finished The Mime Order by Samantha Shannon! This is the second book in her Bone Season series, out of, I think, six books total. The third book was released recently and I will definitely be picking that one up soon. In this second novel, our protagonist Paige Mahoney has returned to the Seven Dials to once again work as the Mollisher of I-4. While she is again under Jaxon’s rule and trying to survive the increasingly dangerous Syndicate, she is also attempting to tell the world about the threat of the Rephaim. She knows that the people, both clairvoyant and amaurotic, need to know about the corruption in Scion and the Rephaim puppet-masters, but how can she get them to believe her? Some spoilers below.

I really liked this second installment into the Bone Season series! 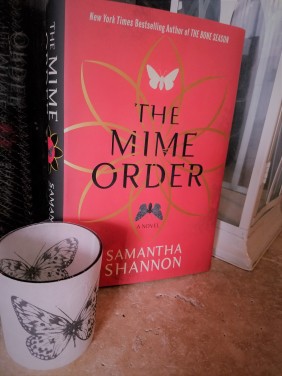 While it started out a bit slow, the second half of the book really packed a punch and made my overall rating four stars. I was actually teetering between three and a half, and four stars, but settled on four, because of that ending, my overall enjoyment of the story, and the fact that I could not figure out how to write the symbol for a “half star” (ha!).

The book takes a little while to get going, because for most of the beginning, we just see Paige reclaiming her role as Jaxon’s second. She hides out for a bit on her own, before taking up residence in his house once again. From there, we see her running errands and reestablishing herself as the Pale Dreamer. Some of the many scenes of Paige constantly running around drug on a little for me, but it was still interesting to get a further glimpse into the Syndicate. The story really picks up, though, after the murders of the Underlord Hector and his crew. This kicks off the “Scrimmage” within the Unnatural Assembly, which is set up to crown a new Underlord or Underqueen. Naturally, Jaxon wants to take up the position, with Paige fighting loyally at his side. But, Paige might have other ideas about that.

The pacing definitely finds its stride at this point in the novel and the plot picks up, too. Up to this point, we have not seen or even heard much of the Rephaim, other than Paige’s stray thoughts about the colony and Warden. Toward the middle of the book, though, a few of them come back to the forefront as reluctant allies. Paige has to rescue Warden from one of the Mime-Lords and uncovers an even more extensive web of corruption than she thought existed. And that’s where I was hooked!

The plot is again, just like in the first novel, extremely complex. There are so many different characters at play here, all with their own agendas, and the setting itself is a huge, pretty tangled infrastructure. Shannon plunges the reader right back into this world of corruption, history, magic, and danger. You either find your footing and go along for the ride, or you might get pretty lost with everything that is going on. I thought it was handled well, though. And PSA! There is another map, a character list, and a glossary in the back of the book, which I did not realize until the end. 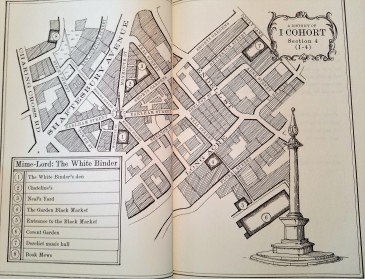 This might help you keep track of all the different character, clairvoyant, and places names thrown at you throughout the book. Even without consulting these helpful resources, though, it was not too hard to understand what was going on. I absolutely enjoyed getting a closer look at how this underground society runs. Even though I admit, sometimes I would completely skip over the random “-mancers” mentioned in passing (I did not really need to dwell on what kind of voyant every random gutterling in the street was). I did like how this second novel did not need to info-dump so much of the world-building details, as those were more carefully woven into the story. The history of the Rephaim, how they split into different factions, and their connection to Scion was very interesting.

In the first novel, I was completely enraptured by the Rephaim, and Warden was by far the most intriguing character to me. And, while I still loved reading about him in this book (he and Paige were so sweet and their scenes were definite highlights for me!), I was happy to see more of the human characters, too. I loved Jaxon! I know, he is evil as all hell, but his smooth manipulation of the Seven Seals, his charm, his sweet cruelty and ambition – awesome! He is a complex, morally ambiguous character and he is written wonderfully. So fun to read! He also gives me major creepy Fagin (a la Oliver Twist) vibes. I definitely loved seeing more of the supporting cast, as well. Eliza, Nick, Zeke, Ivy, Cutmouth, and others were further fleshed out and we saw more of what has shaped them as people. The complexity of their relationships, friendships, and loyalties is wonderful to untangle and explore.

Speaking of relationships, I loved the development between Nick and Zeke. While understated, I thought that their relationship was the most touching and so bittersweet. Without too much being said about it, you can see the love that they have for each other and the pain that it causes them to have to keep it a secret. Zeke walking away from Nick in the end was heartbreaking, but I hope that in future books, they will reunite. And I thought the scene where Paige finally let go of her romantic love for Nick, where she was purely happy for him and Zeke was wonderfully written. Besides, Paige has her own relationship to think about. Ahh! She and Warden were so cute together. I am totally digging the slow-burn courtship they have going on and it seems very in-character for both of them. They are both wary, determined, and ambitious people with bigger things to dwell on than simply eye-banging (even though we readers want that, too!). Obviously, they will be a little distracted by, you know, impending war. I was even a little surprised by the quick acceptance from Warden, as I thought he would try to keep Paige at a distance again. But, I am glad he didn’t! Their scenes were realistic (the discussion about Paige “going out” = too many emotions to handle), sweet, mature, and full of delicious tension, as well. I do sense that there will be some obstacle thrown in their path again, whether it is Jaxon or the Ranthen, or…something, so I am preparing myself! No matter what, though, I look forward to reading about how their relationship progresses in the next book.

There are also brief appearances by additional characters, such as the other survivors of the colony, Paige’s father, other Syndicate members, and the Ranthen (who are the “good” Rephaim like Warden). And, constantly looming in the background is the threatening presence of Nashira and the Scion government that she controls. The stakes are higher in this book, the deaths more brutal, and by the end of the book, the characters seem to have realized this. There will be sacrifices.

The book ends on a semi-cliffhanger, still right in the middle of the action, so I am already itching to get my hands on the third installment! The penultimate scene where the Mime-Lords, Mime-Queens, and other contenders are battling it out in the Scrimmage is fantastic! It is harrowing and the action is fast-paced, making the reader hold their breath until the final outcome. There is some ‘poetic justice’ for some of the players here, but still, others slip away. I know we have not seen the last of a few of those villains (lookin’ at you, Rag and Bone Man). It was great to see Paige (Or should I call her something else now?) gain confidence and come into her power in such a strong way. She used her skills and her cunning with such finesse. She was the voice of justice and truth here, so rooting for her success was easy. Then, at the end, we are left with the promise of even more battles for Paige and her allies to fight. All of the threats and the dangers are still very much present. Paige may have discovered the extent of the corruption, may have given herself a platform from which to lead her people (yeah, HER people!), and may have found herself some powerful allies. However, that does not mean that anything has actually been resolved. The real war has just begun.

And oh! So, was it just me, or did you guys think there was a connection between the “mysterious human” who betrayed the first Ranthen uprising and the fact that Nashira called Jaxon her “old friend?” Ummm what?! I knew that sneaky bastard was hiding SO much shit! Can’t wait to see what happens!

What did you think, Cake?

Wonderful, O my lovelies! And I think Madam Cakleton makes a dashing Mime-Queen name, don’t you?

Pick up your copy of The Mime Order here!