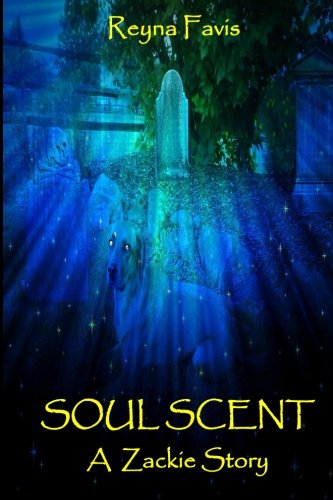 “I did not want to imagine, but the worst part was that in my experience, the truth could easily outstrip my imagination.”

In this second installment of The Zackie Stories, author Reyna Favis brings everything I loved about the first book and more. She really ups the ante here and creates a stronger, bolder thriller. I was wavering between 3 and 4 stars for this one, and decided overall to go with 3.5 stars, because of the progress made from the first book, and the potential for this to become a great full-length series. All of the characters that we met in the previous book are back and they create a fun and endearing misfit ensemble. Fia returns as our main character, with her life teetering precariously between a normal Search and Rescue field agent and paranormal soul seeker. As much as she tries to keep her two lives separate, though, a tragic event threatens to merge them together, when her team has to search for a body in the woods.

I really enjoyed Soul Scent! It was such an exciting and fun read, and I was happy with the improvement that I saw between the first installment and this one. Favis has strengthened her hand as an author and I feel like I became more immersed in the story as a result. Her plot and characters drew me in and I was excited to read through the book.

I was glad to see that Soul Scent picked up pretty much right where Soul Search ended, so we didn’t lose any of that momentum from the first book. Fia is still dealing with the events that recently occurred and is struggling to maintain her normal life. Her hand is still giving her trouble, too! That “dead” hand of hers that seems to have a life of its own is so creepy to me and is a really interesting hurdle for Fia to overcome. Overall, I feel like Fia has grown as a character between the two books. There is a certain depth to her thoughts now, since she has been through everything that occurred in the first novel, that creates a richer reading experience. Her narrative voice is stronger and, as a result, the book has a clearer flow in general. I was in the story completely this time, instead of being slightly removed from it here and there.

Cam and Zackie continue to be great! I love Cam’s ongoing friendship with Fia and their support of each other. I love to see that they have grown closer as confidantes and friends, considering that they do not have many people to really get to know at that level. They are both somewhat isolated, but they have found a partnership and strong bond between the two of them. It is great to read! All of the research and theories that Cam and Fia explore in this book, to try and get to the bottom of the latest mystery, were very interesting to read about. I admire the time and effort that Favis has put into pulling plausible research and events into her stories. It gives them a truer (and more suspenseful) edge. At the end of each book, she cites the sources for many of the events that are mentioned, that have inspired her work, which I love! I love that the credit is given to those real-life people/events and that I can look into them further, if I choose. The latest mystery is certainly no picnic, either. When everything is revealed, it is a tragic and chilling tale.

And of course, Zackie is the real MVP! I love Zackie as a character and enjoy how serious she is about her work as a psychopomp. She may look like an adorable Plott Hound (like my Sky Dog), but she is all business! I think it is great that Favis has created such a unique and compelling personality for a character that doesn’t even speak. Everything she needs to say is conveyed through her eyes and her actions. She is truly a cool character. The ancient lore regarding the psychopomp myth, which Flavis incorporates into Zackie’s story, continues to fascinate me. I love learning more about it and the history of this mythological being.

I was very pleased to see that the subplot of Hannah and Lucas was not shoved aside. Since the book is so close to the previous one, it makes sense that he is still dealing with his loss and I was glad that that was addressed, even if he is opening up to Fia and Cam more. I also liked that Hannah’s presence was still felt in a very real way. It was very suspenseful and made for a great read! In the previous book, I was a little put off by how Fia was basically all over Lucas, despite his wife dying in the next room. Not cool, Fia! However, it seems like here Fia takes a more respectful approach to her attraction and actually gives Lucas time to grieve and make his own decisions, based on what is best for him. That sits much better with me.

All in all, the human interactions, drama, and intrigue were equally as interesting as the paranormal ones! The new characters that we meet are really neat, as well, and give a sense of growth to the book. Fia’s world is widening and the supernatural elements are farther reaching than she imagined. This also provides more people like her to be around, to learn from and connect with. Fia is beginning to feel a sense of camaraderie and almost family with the others like her, which is nice to see.

The writing was great in Soul Scent. As I mentioned, the stronger narrative voice of Fia did wonders for the story’s pacing and impact. The descriptions were necessary and added to the story, and they were not just there for filler. The transitions between research/lore discussions and the story/dialogue were a lot smoother this time around. Overall, the novel felt tighter and the writing was cleaner. I never felt bored or like I was reading a few pages that might not need to be there. It was a compact book with a huge punch! The action, as before, was the best part. Favis does a great job setting up the climax of the book with mystery, thrills, intrigue, and misleads. This all creates a suspenseful atmosphere that bursts with the action at the end. It is very exciting! And, I loved that she maintained that quirky sense of humor throughout the book, as well, because it is very much a part of Fia’s voice and I would have missed it if it was gone.

After reading Soul Scent, I am even more of a fan of Zackie and her human helpers. I will definitely keep an eye out for the next installment of this thrilling, fun series!

Again with all the dog praising! We get it, she’s a badass, magical dog that helps people in need. Big whoop!

Read on, my friends!