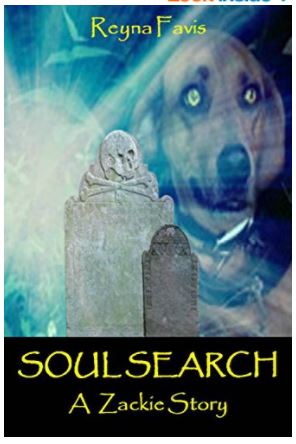 “The dog quickly passed each person as they offered their hands for the dog to sniff. I stood still with my hands extended as the dog took my scent. Rather than move on to the next person, she paused and stared directly into my face. Her eyes were the color of whiskey and surrounded by dark fur, as if someone had outlined them with kohl to emphasize their distinct color. While I thought her gaze would be gentle like all the other dogs I have encountered, I instead saw a disturbing intelligence that I was not prepared for.”

When the author of the Zackie Stories, Reyna Favis, reached out to me, I was thrilled! Of course I would jump at the chance to read a series featuring a Plott Hound and rep for the coolest dog breed there is. I was already interested, but when Reyna began telling me about her own background as a K-9 handler working in search and rescue, and her idea about creating a fantasy/supernatural suspense series around that concept, I was beyond sold. Soul Search is such a unique and entertaining book, and I would officially give it 3.5 stars.

So, this review is going to be mostly spoiler-free. Since this is a book that I knew nothing about beforehand, I would give you guys the same experience of going in blind. Not knowing what to expect is part of the thrill! Overall, this was such an exciting, different, and fun read!

The idea of Zackie, a search and rescue dog that happens to be an immortal aid to dead spirits was great. Now, I may be just a tiny bit biased, because Zackie was a Plott Hound, but she was so cool! I loved the history of the Plott Hound that was added in to help strengthen her character and familiarize the audience with the breed, as well. Similarly, the background information on the psychopomp was very interesting, as well, and tied the supernatural elements of the story together in a nice way. And just so everyone knows what I am referring to when I call Zackie a psychopomp, it is a mythical creature responsible for escorting the dead to the afterlife. Before reading the story, I was definitely impressed with the creativity of this premise, and I am glad to say that the author delivers!

The other main characters were equally well crafted, even in their flaws. I liked Cam, Zackie’s handler, a lot. He was very honest and no-nonsense, but still came across as a caring, intelligent man with a lot to offer humanity. Fia, who is really the main protagonist, was a great character, but was a little harder for me to love. She was difficult at times and some of her choices left me not wanting to root for her (I can’t say what without risking spoilers, but let me just say that I felt she could have handled some of her feelings better than she did). But, overall, she was tough, sarcastic, brave, selfless, and endearing. The author had a way of making her very relatable, too, which was refreshing. Some of Fia’s inner thoughts, mostly about bodily functions or bad table manners, really hit the nail on the head. The slightly more minor characters were all well developed and added to the story, as well.

I think the story was written quite well, but some things could have been polished up just a tiny bit more. The pacing, action, suspense, and background history were all fantastic! I loved how authentic all of the search and rescue scenes read and the accurate portrayal we were given, thanks to the author’s background. I think things fell a little flat, though, with the dialogue and with some of Fia’s narration. The dialogue for the most part was natural and convincing, but some parts felt just a little stilted and forced. Some of Fia’s thoughts were too superficial and telling. It lacked the depth needed to really make the reader feel what she felt or explain what she was thinking in a way that was not distracting. I think that these things, though, will be ironed out as the author writes more novels, and they were not enough to detract from the enjoyment I got while reading the book.

The story’s climax was great and full of excitement. The whole book, with its supernatural/paranormal mystery and crime elements, reminded me a lot of Odd Thomas by Dean Koontz. So, if you are a fan of his novels, definitely pick up a copy of Soul Search! Then in the end of the story everything just burst out with action and danger and sacrifice. It was an awesome ending that definitely left the door open for sequels! I think that the Zackie books, could be a wonderful new series in this genre. They will keep people coming back for more ghostly adventures with my favorite new Plott Hound (just kidding, Scylla!). Please check this book out and stay tuned for my review of the sequel Soul Scent! 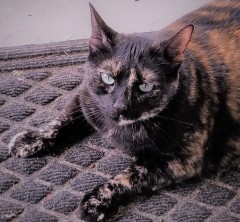 Of course, it would be a Plott Hound sidekick and not a cat! Good thing this book was exciting enough to distract me.