“When you dream of change, it shines bright, like fire, and burns away all the rot that came before it. It’s swift and inexorable. You cry for justice, and justice is done. The world stands with you in your fight. But if there was one thing I had learned in these last few weeks, it was that change had never been that simple. That kind of revolution existed only in daydreams.”

This book was so good!! I flew through it in like a day and a half, and now I am kicking myself right in the arse, because The Bone Season #4 will not be released until mid-2018. Urgh, whyy!!

In this third installment of the series, we follow Paige and her crew, as they take on the Senshield technology that is threatening all of the voyants. After winning the scrimmage at the end of the last book, Paige is now Underqueen of the entire Syndicate, but things are not running as smoothly as she hoped they would, after such a victory. She must prove to the Syndicate that she is the best choice to lead them, prove to the Ranthen that she is worth their support, and prove to Scion that she can act on her threats to take them down. 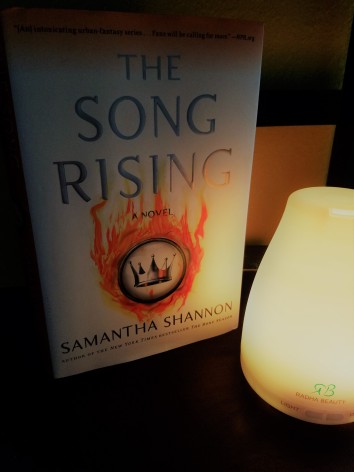 Okay, let me just throw this out first, but I was so right about Jaxon being the human from the previous Bone Season!! Maybe it was obvious, but I was still like, HA! He was the reason the first Ranthen revolt failed, and the reason Warden and the others have those scars on their backs (exactly how they got those scars is revealed later in the book and it is super creepy!). So, basically, Jaxon is evil and conniving and opportunistic and manipulative and oh, what?? I still love his character! Seriously, I am so glad he is still around to eff shit up, due to his clearly unhealthy obsession with Paige, because he is incredibly complex and interesting.

And not only Jaxon, but so are all of Shannon’s characters. I admire her writing and characterization so much, because she never relies on tired tropes or cliches. Each character is multi-faceted and written in a mature, smart way. Paige is amazing! She does not fall into any of those worn out, eye-roll-worthy pits of a “young, female protagonist leading the revolution in a dystopian society.” Bleh, it even sounds cringey. Paige’s plans are always carefully considered, she seeks the advise of older, more experienced leaders, she is willing to sacrifice everything to succeed, and she never loses sight of her ultimate goal to protect her people. She is pragmatic and never lets her emotions, or feelings for Warden, cloud her judgement or distract her (even if we want them to!!). She is tough, clever, and an all-around kick-ass character! It is refreshing to read a series with a main character like Paige.

The supporting cast is, once again, an important, central part of the story, not just a bunch of extras thrown in for spice. As Paige tries to maintain control of the Mime Order, she forms a council to assist her, giving us more insight into Tom the Rhymer, Ognena Maria, Wynn, Eliza, and of course Nick, as well. I greatly enjoyed learning more about Tom and Maria. As they were older characters, they had memories of past battles and experience fighting against Scion before, in Bulgaria and Scotland.  They were interesting, well-rounded, and likable characters. And Maria was hilarious! I loved her brusque humor and her passion. She was also a well-written transgender character, who was not completely defined by that label. She was a badass, funny, loyal fighter who happened to be trans. Like Nick was a kind-hearted, intelligent doctor fighting for justice, who happened to be gay. Shannon writes her characters in a natural way and I thought she did it really well.

We also meet some new characters here, as Paige networks around London to keep her people safe, once the Senshield is able to detect them on the streets. Jack Hickathrift was a great character and I would love to see more of him. He was funny and charming…and Paige straight up didn’t care. Ha! Oh well, more for Eliza. The leader of the Beneath, while we did not see much of him, was interesting. That whole concept was cool and creepy as hell. I know I’d be freaking out in an underground, sewage filled tunnel network. For months! Hell no. Also, did anyone else cringe when he sliced Paige’s hand open and then dunked it in that dirty river? I was like THANK GOD they made her clean it later! Please, disinfect that shit!

Once Paige and crew travel to Manchester (and then Edinburgh), they meet some  connections of Alsafi, the Ranthen spy in the Scion headquarters. There are a lot of names, both people and places, being thrown around in the book, but it never got bogged down or confusing to me. The Attard Sisters were interesting, especially how the straight-laced, rational sister refused to help Paige and then the wild, reckless, borderline evil sister helped them, if only for her own gain. That highlighted some of the moral stretches that Paige is forced to go to, in order to accomplish her goals. Hildred Vance was terrifying! She was some soulless, robot lady relentless in her need to ruin Paige. Her mental and physical warfare was truly frightening. Finally, for the new faces, I really liked seeing Liss’ family, if briefly. It was nice to see that closure for them and for Paige. And, it set them up as allies to support each other in the coming revolution.

And coming, it is. Here, we see the revolution that started in the Bone Season erupt in full force against Scion and the stakes are much higher. This book, while being the third novel in a 7-part series, in no way felt like filler. The plot is rich with action, adventure, suspense, history, and drama. It has everything. This book, moreso than the previous two, felt like a classic Dystopian. It was more direct in the sense that Paige was literally taking on Scion, giving all she had to bring down the corrupt government. I read on Shannon’s Tumblr page, where she answers fan questions every Sunday, that she tries to write each new book in the series as a different sort of genre. Not completely, but she wants to give the readers something new and unique with each reading experience. She said the Bone Season was written like a jail-break, the Mime Order like a murder-mystery, and the Song Rising like a Dystopian. I love that idea and am excited to see what the next four books have for us. And, if you are interested in news about the books or more insight into the world/characters, go follow her Tumblr !

Paige’s scenes in Scion where she was being tortured and taunted, where she lost all hope and was ready to be executed, where Jaxon and Nashira tried to force her to turn on her people with false promises –  damn, those scenes were brutal. Reading about her getting continuously water-boarded, beaten, and drugged was intense. It was hard to read, yes, but at the same time, I did admire Shannon for refusing to sugar-coat anything. If I am reading about a damn uprising against a vicious government, then I need to believe it! And I definitely did. Paige’s injuries and mental strain are not just overlooked the moment she escapes and Shannon makes a point to reiterate that. It is realistic and just good writing.

Not only is Paige going head-to-head with Scion in this one, but she is also traveling outside of London, so the scope of the world becomes larger. This effectively gives the reader a look at life for voyants in other parts of the world and also shows how far Scion’s reach really goes. How far the whispers of revolution have spread. The final scene of the book has the crew breaking up for a while, each being sent off on tasks by a new player in the game (Who the heck is pulling the strings, now?!). Some are being sent to different countries, even, to carry out their assignments. This makes me think that the next book(s) might have multiple points of view, instead of just Paige, in order to reach all corners of the setting. We will see, but I would be on board for multiple perspectives! And if not, at least Warden is with Paige, so we know their scenes will be together in the next novel ;).

Speaking of…Paige and Warden were once again fantastic together. There is so much tension there, sexual and otherwise, that makes every scene between them electric. It was heartbreaking to read Paige struggling to trust Warden, after being betrayed by Jaxon and hearing that Warden was just using her. I felt so bad for Warden, too, because he seemed to genuinely not understand! The poor, dumb non-human haha. He was like, “Ok, I will leave you alone, but I do not know what I have done wrong.” Cue sad lamp eyes. Then, when Paige decides she is going to trust him, she freaks out that he is distracting her from her leadership role and tells him they are just allies, nothing more. Nooo Paige! I did not go through this torturous slow-burn for nothing! And they are so cute and supportive of each other, and have all their secret kisses. Gah! I have hope though, since they are both being shipped off to Paris in the next book…alone *eyebrow wiggle*. Also, I am still waiting to hear why Warden kissed her at the Bicentennial and what she could see that would give away his feelings for her. Why wouldn’t he tell her?? Is it that flower in his dreamscape?? I need answers dammit!

Overall, brilliant book, awesome plot and characters, and I have no clue how I will wait until next year to read more. Why do I always torture myself like this??? The world may never know. I will just repeat Warden’s quote to myself until the next book: “You have risen from the ashes before. The only way to survive, ” he said, “is to believe you always will.”

Get your copy here!! Thoughts, Cake? 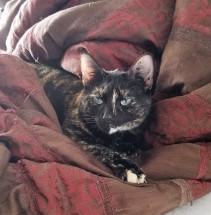 Absolutely thrilling! And what do you mean an entire year?!

2 thoughts on “Book Review: The Song Rising by Samantha Shannon ★★★★”